The longest bridge in Finland was built in order to replace the ferry connection from the Raippaluoto islet to the mainland.

This cable-stayed bridge is over one kilometre long, and its main designer was the Oulu-based engineering office Suunnittelu Kortes.

“The people at Kortes had learned to trust us during the bridge boom. They believed in my ideas about installing the bridge and how it was divided into sections. So, we proceeded by using my ideas for it and everything went well,” recalls Markku Rautio about the early stages of the Raippaluoto bridge.

Finland’s longest bridge is an impressive sight because of its length as well as other statistics. The 1045-metre-long bridge’s two concrete pylons reach a height of 82.5 metres, and the clearance height for the waterway below is 26 metres. In addition to pylons, the cable-stayed bridge is supported by 9 intermediate piers and two land abutments as well as 64 steel cables. The bridge’s roadway is 12 metres wide.

At the time, the project cost 150 million Finnish marks, which is around EUR 3.5 million today. 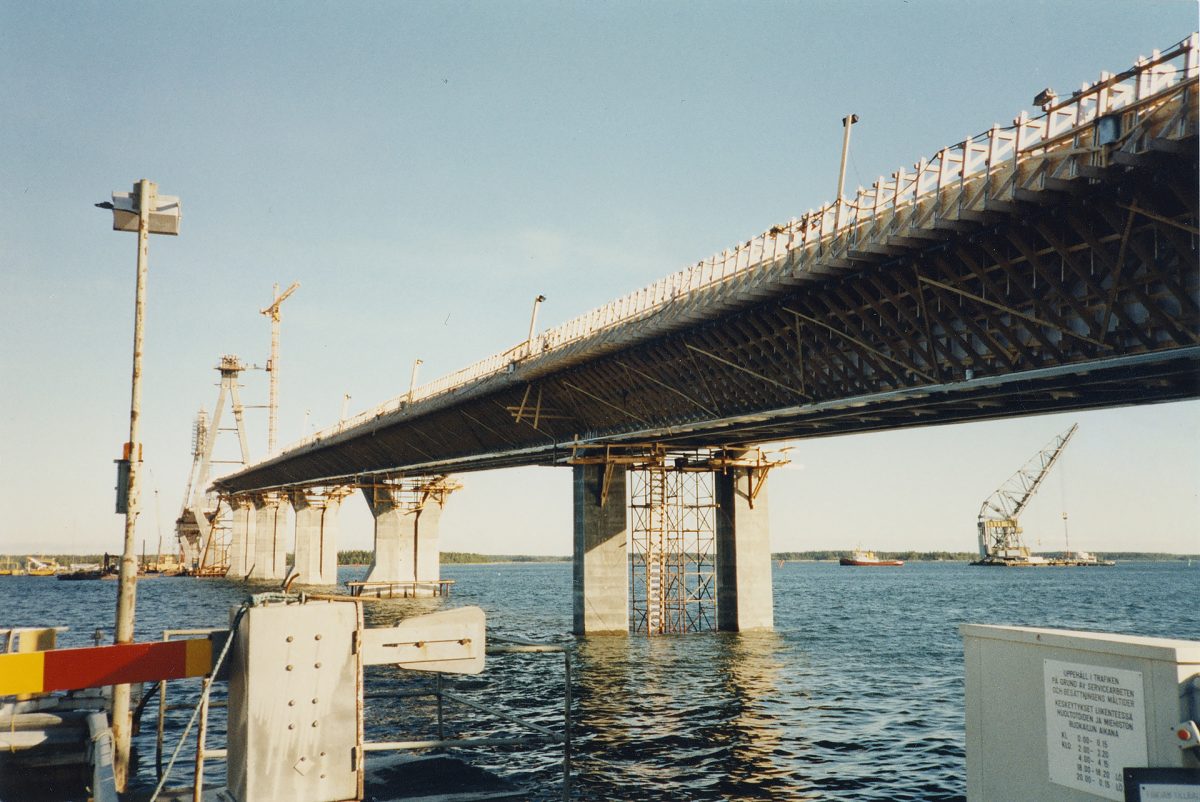 There were quite a few challenges in installing the bridge in the windy Merenkurkku archipelago.

“There were many challenges. For example, one challenge was lifting the 250-metre-long mid-span sections with a Derrick in those circumstances. It was just before autumn, and the wind speed was 28-30 metres per second. Connecting the bridge ends and waiting for the right moment to attach them was also difficult,” says Markku.

The Raippaluoto bridge was the first bridge in Finland to be welded with flux-cored wire, that is to say, by MIG welding in outdoor circumstances.

“We did tacks with sticks. The rest was MIG welded, even over the sea in stormy weather. We made a plywood booth around the areas to be welded, and we sealed the holes by using insulation wool in order to make it windproof. There were not many days when the weather was settled. Because of this, it was a very challenging object to weld,” explains welder Jouni Alho, describing how welding works were conducted on the bridge. 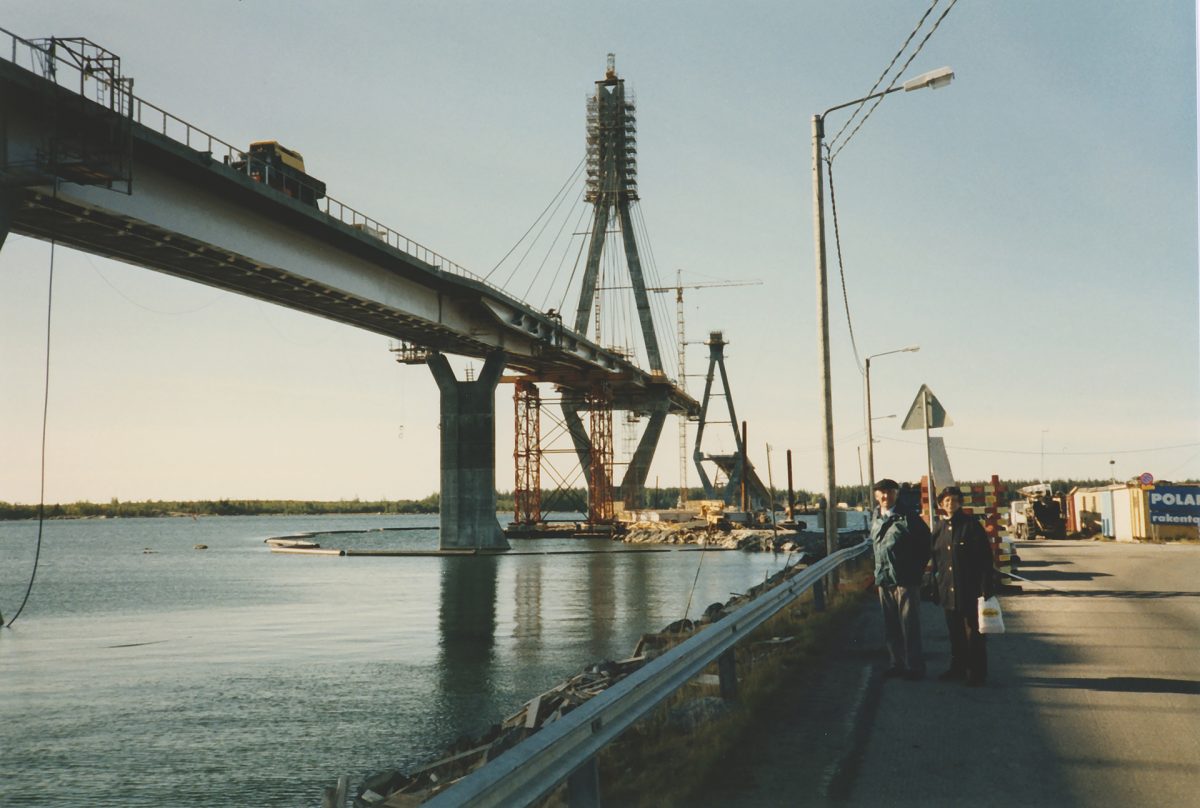 This massive bridge project also attracted international attention in the 90s in the form of delegations which visited the site.

“It was an interesting site. Every time you looked up you could see lacquered shoes on the deck. We had to keep saying to the interpreters that we didn’t have time to talk,” recalls Alho.

Winter was coming, so the schedule was tight. We had to make quick decisions about changes to avoid losing valuable work time. There were also some incidents, Alho laughs.

“Our shelter booth burnt down once. Slag or some other stuff was left on the plywood. It burnt like a torch up there in the dark autumn night, and the ferrymen noticed it. Such small things happened sometimes!” 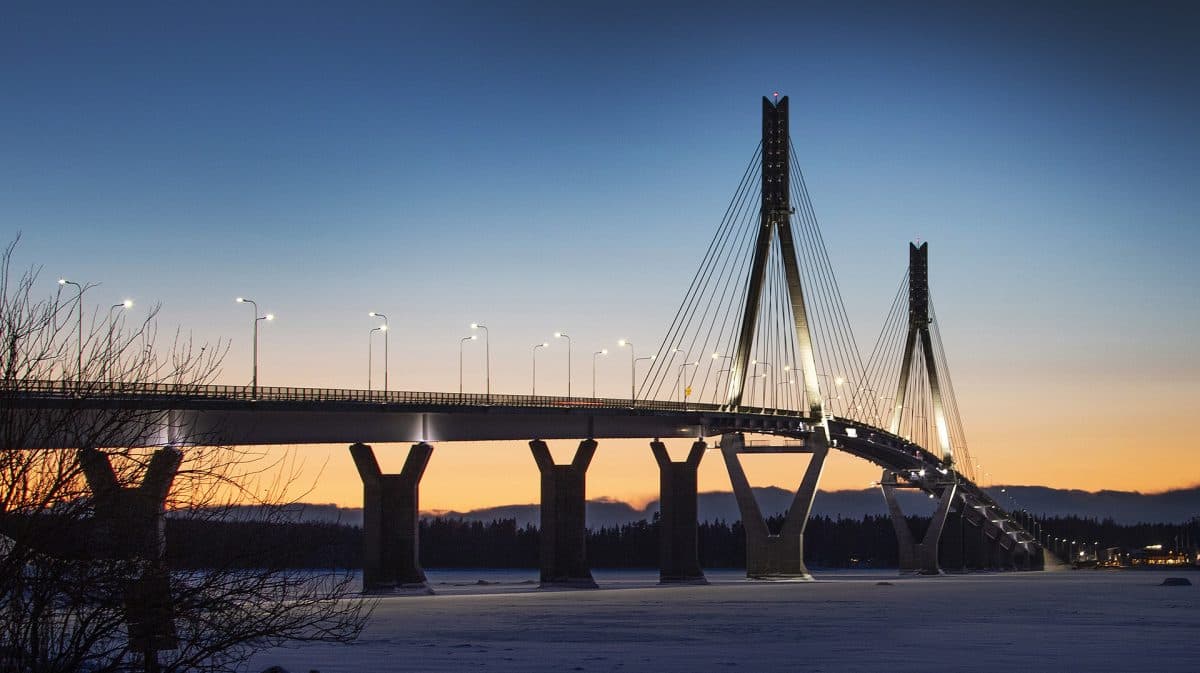 The Raippaluoto bridge was opened to traffic on the 27th of August 1997.

You can find out more about which cookies we are using or switch them off in settings.

This website uses cookies so that we can provide you with the best user experience possible. Cookie information is stored in your browser and performs functions such as recognising you when you return to our website and helping our team to understand which sections of the website you find most interesting and useful.

Strictly Necessary Cookie should be enabled at all times so that we can save your preferences for cookie settings.

If you disable this cookie, we will not be able to save your preferences. This means that every time you visit this website you will need to enable or disable cookies again.

This website uses Google Analytics to collect anonymous information such as the number of visitors to the site, and the most popular pages.

Please enable Strictly Necessary Cookies first so that we can save your preferences!